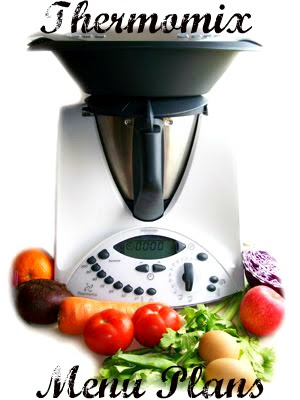 Hi everyone, I'm finally getting back on the wagon with my menu plans! I haven't managed to get them done the last few weeks, and it's starting to make me a little crazy as I keep finding things in my fridge I've forgotten are there... When I have a menu plan, I find there's a lot less food wasted, because even the leftovers are planned into the weeks' meals. (It also doesn't help that my boys have been away, so I really should be cooking half as much, but I'm not!)
We're enjoying the gorgeous weather at the moment - winter in Far North Queensland is so beautiful. Every day we eat our lunch outside on a blanket in the sunshine and soak up the warmth for a little while... lovely. (Miss C likes to pick a flower for our 'table'.) We've become addicted to purple carrots, and always have to have some for lunch - they're so sweet and juicy, and the colour is so pretty. A great way to get kids to eat more carrots! Have you tried them? 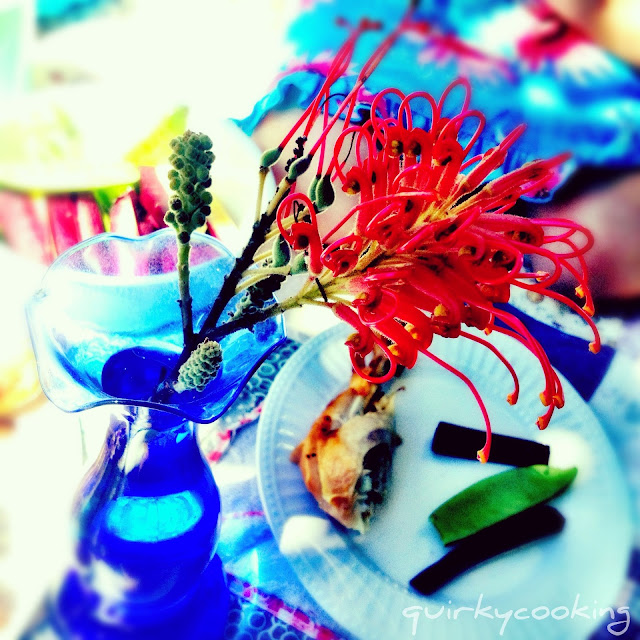 It's been a while since I blogged my menu plan, so I'm a bit behind with all the food photos... Here's a few to catch you up with what I've been making the last few weeks.
We had a great 'Devil of a Cookbook' class in Cairns a couple of weeks ago (which was to raise money for the Tassie Devils), learning from the lovely Fiona Hoskins. One of the things she taught us was how to make traditional Ciabatta (Mick's Ciabatta)... oh my. That bread is dangerous. So so good. Check out the photos from the class here on my Facebook Page. 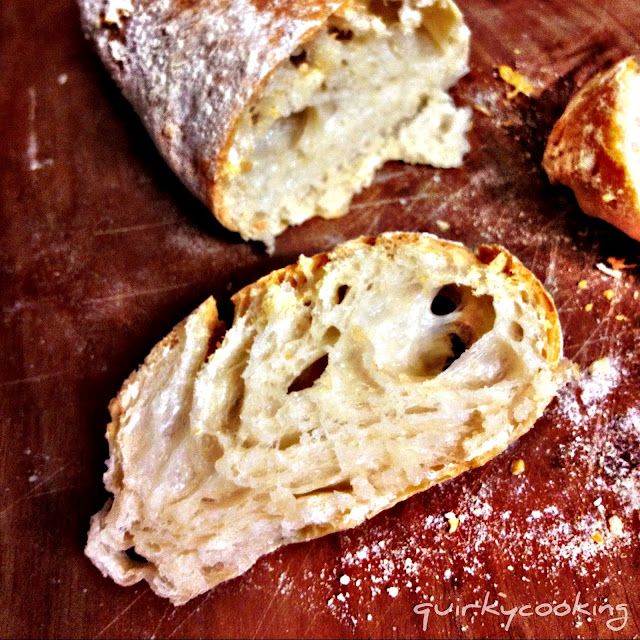 Mick's Ciabatta - crispy, crackly crust; chewy & light on the inside. YUM!!
I did make a spelt version at home as well, which we loved. It's heavier than the wheat version and doesn't rise as much, but we really enjoyed toasting slices of it in the sandwich press, rubbing on a cut garlic clove, sprinkling with celtic sea salt, and drizzling with olive oil. Mmmmm...
One of our favourite cold weather meals is my Corn & Potato Chowder with Chorizo Sausages. I still haven't gotten around to updating the recipe with the Thermomix method (which is a lot quicker), but basically all you do is make 500g of white sauce with a cup of corn added into it, add 500g chicken or vege stock (water and stock paste), add the chorizo sausages to the bowl plus as much cubed potato as will fit (up to 2 litre mark), and cook at Varoma temp with more cubed potatoes, carrots and extra corn steaming on top. Takes about 25 minutes. Stir in a bag of baby spinach leaves, and voila! Easy and delicious dinner to serve at least 6 - more if you serve it with bread. To cut down the recipe, you can halve the ingredients, but not the cooking time.﻿ 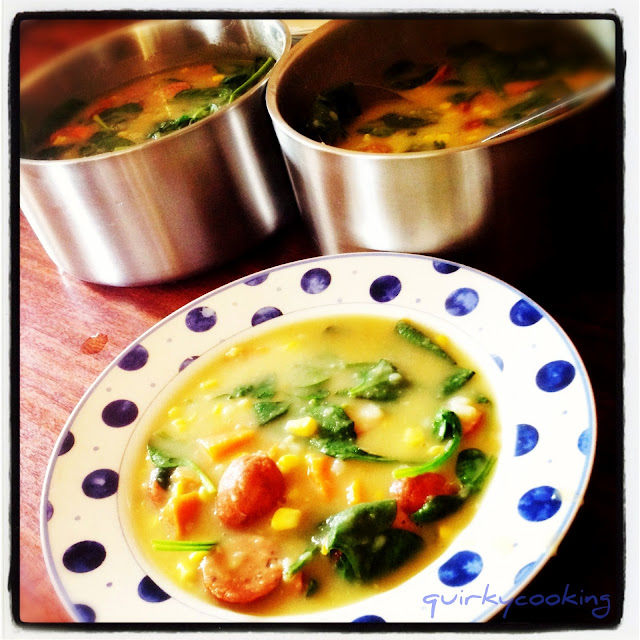 Corn & Potato Chowder with Chorizo Sausages
And I'm SURE most of you heard me raving about my Cinnamon-Orange-Almond raw chocolate!! Ooooooh, it's so amazing. The recipe is basically my 'Almost Raw' Chocolate, but I've added ground up cinnamon sticks, vanilla bean and fresh orange peel, plus some amazing Lucuma powder (a Peruvian superfood that has a citrus flavour), and poured it over flaked almonds. Divine. And good for you! No dairy, no soy, made from raw cacao butter and raw cacao powder, with some Rapadura and raw honey to sweeten. If you desperately want to know how to make it, you can either come along to our Chocolate Making Day this Friday (see menu plan below), or check my Facebook Page, or hang on a bit longer and I'll get it up on the blog with photos of each step. 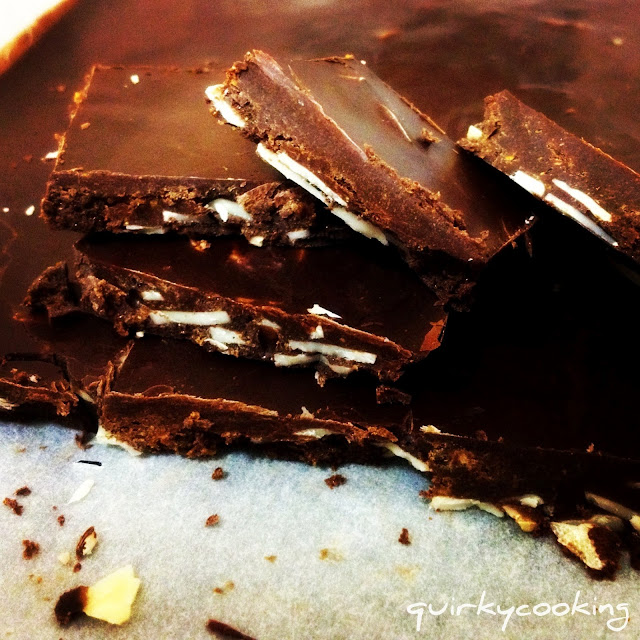 Cinnamon-Orange-Almond Raw Chocolate
If you're stuck for ideas for a warm, comforting breakfast, here's one we love: Creamy Coconut Vanilla Rice Pudding with cherries... (Also great for desserts and snacks!) 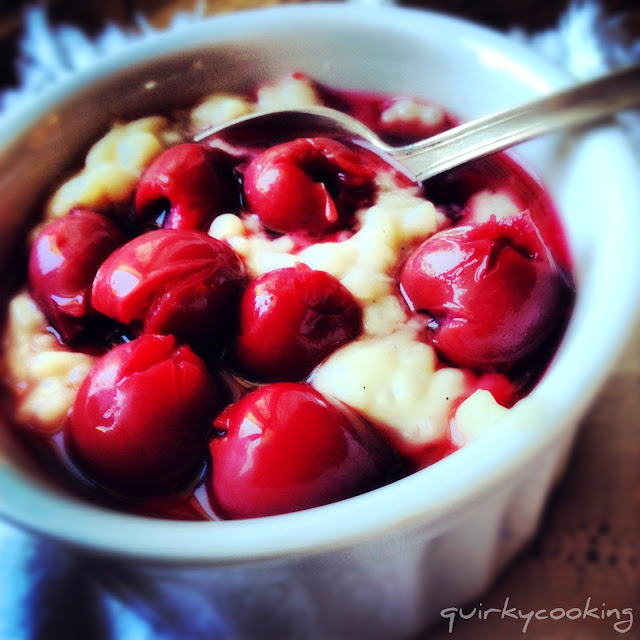 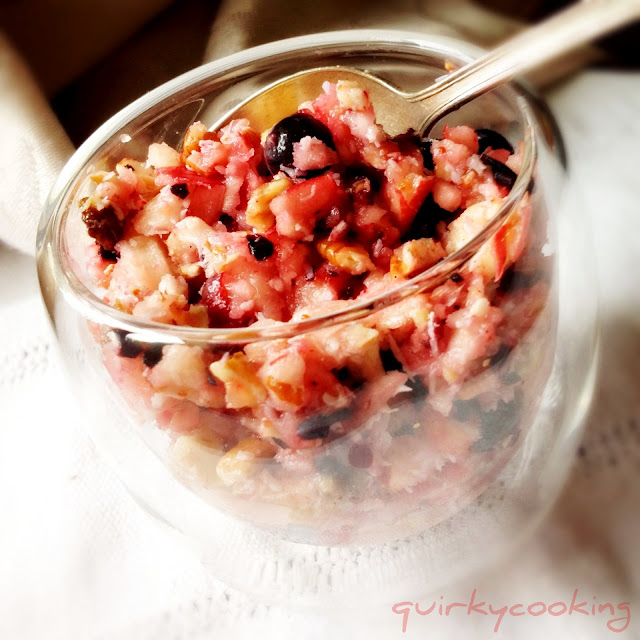 Pink Fruit Cereal
And one more quick tip before I get to the menu plan - here's how I use my Varoma to heat up leftovers. Just pour boiling water into the bowl to cover the blades, place leftovers in the Varoma trays, and cook for 10-15 minutes at Varoma temp, speed 1. Or you can have a soup or pasta sauce cooking in the bowl at the same time as the leftover bits and pieces steam on top. I usually add some fresh veges as well. If any of your leftovers are wettish, and would drip through the holes of the Varoma trays, you can just line the tray/s with wet baking paper. Or, place the leftovers in a bowl or on a plate that fits in the Varoma. This is great for those of you who are just cooking for one or two - there's always leftovers! Just fix yourself a plate of leftovers, pop the plate into the bottom tray of the Varoma, and warm it up for 10 minutes. Much, much better than using a microwave. And the food turns out nice too - risotto, fried rice, pasta, etc, will be re-moistened and refreshed, not gluggy and cementish. You can also warm up your day old bread rolls and cakes this way, and they'll be soft and moist again. I love my Varoma :-) 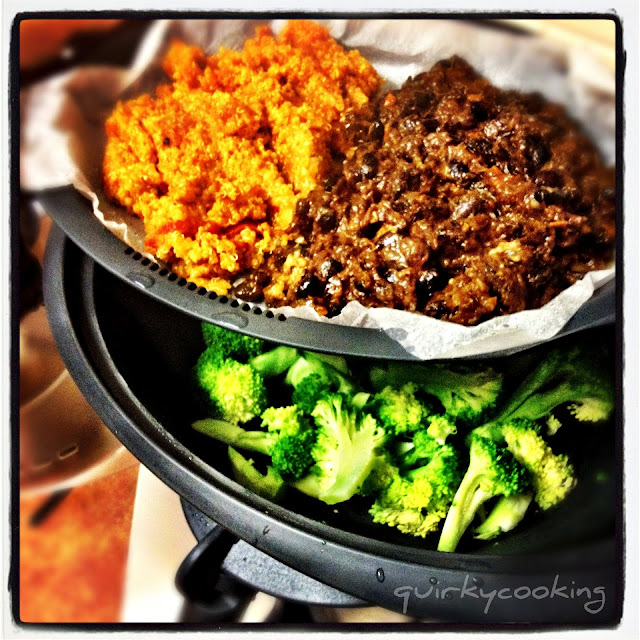 Warming up leftover Mexican Quinoa and Black Bean Mole in the Varoma,while cooking some fresh veges underneath.

Friday:
(lunch) Chocolate Making Day!!! A group of fellow chocoholics will be gathering at the local CWA hall where I'll be showing them how to make their own Raw Chocolate in the Thermomix! We'll also be making Chocolate Chilli Chai, and Black Bean Mole, and serving that up with some gluten free cornbread and whatever else everyone brings along for lunch. (If you're in the area and you'd like to come along, please call or email me - spaces are limited.)
(dinner) Leftover soup/stew

Saturday:
(lunch) We're going to the ZOO! Breakfast with the Beasts and lunch with the lemurs, I think! :D
(dinner) Pasta e Fagioli (tmx - quick & easy, and the kids love it!)

So what's on the menu at your house this week? Share your ideas and favourite recipes on my Quirky Cooking Facebook Page, under Thermomix Menu Plans! Have a great week :-) 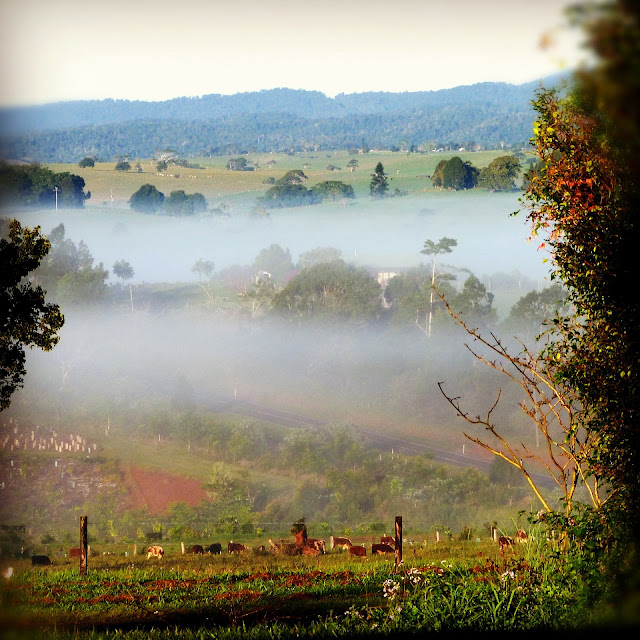 Hope the weather warms up soon... brrrrr!!(Photo taken by my daughter from our street)